When was the last time your lady parts felt funky?

Yes, we’re going to talk about vagina health today because there’s something that many of us are doing wrong when we think something’s not quite right with our cha-chas. Think back to the last time you had any of the following symptoms:

a)    Abnormal or excessive vaginal discharge.

b)    An itching or burning sensation when you pee.

c)    An unpleasant odour down there.

If you’ve ever had more than one of the above symptoms at one time, then you’ve had some sort of vaginitis, an umbrella term for any infection or inflammation of the vagina.

The Skiny on Vaginitis

There are six types of vaginal infections, with the three of the most common types being: yeast infections and bacterial vaginosis (both caused by an overgrowth of bacteria) and trichomoniasis, colloquially known as the “trich” (caused by a parasite).

Trich is an STD that requires prescription medicine and has been associated with increased risk of cervical cancer and fertility issues for women.

Vaginitis can also be caused by allergic reactions to topical products such as douches, spermidcal products, sprays, soaps, and detergents.

Since there are various strains of vaginitis it’s tough (even for doctors) to nail down the diagnosis.

And due to the abundance of free health information online, our inclination to play Dr. Google is stronger than ever. Add the fact that having a situation down there is something we’d prefer to have over and done with sooner than later, it’s no wonder that women are self diagnosing themselves and treating vaginal disorders with over-the-counter remedies.

Flashback to a summer day in 2001: A naive girl hastily buys a box of Canesteen and a gallon of cranberry juice from Shoppers to quickly clear up what she swore to be a yeast infection, potentially caused from wearing wet bikini bottoms for longer than she should’ve have. The cranberry juice was a tip from a co-worker who said it was a proven old wives tale that helps stop the pee burn, though the girl didn’t have this symptom, she still bought the juice for extra “care.” How did she know for certain that what she had was, in fact, a yeast infection and not something else? The young girl didn’t. She just didn’t want to go through the trouble of booking a pap smear with her stodgy male doctor. 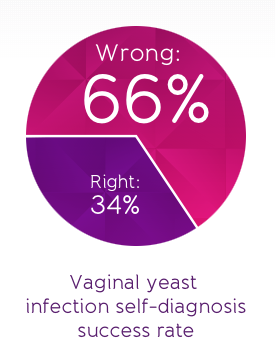 And that’s not a smart way to go about it. (Now I know better!)

In a study done on 95 women with vaginitis, more than 66% of the women who self-diagnosed themselves were wrong. Contrary to popular belief , the most common vaginal infection is bacterial vaginosis, not a yeast infection, and must be treated with antibiotics.

In another study, it was shown that 21% of the women with a yeast infection actually had mixed infections – a combination of yeast infection and bacterial infection and/or trichomoniasis. Since each type of vaginitis is caused differently, it requires a different treatment options to clear it up. 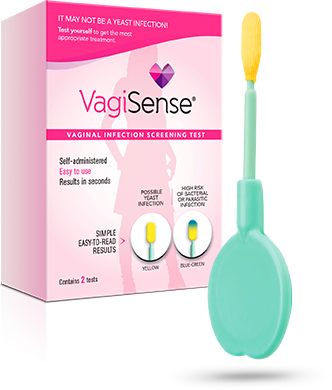 So what can you do the next time you suspect trouble brewing in your nether regions? Smack some VagiSense in there! Literally…

Available at your drugstore for $16-$18, VagiSense is an easy to use at-home swab test helps determine whether your symptoms are more likely the results of a bacterial or parasite infection. VagiSense works by measuring the acidity level of the vagina, the pH balance. A healthy normal pH range is between 3.8 and 4.5. Bacterial vaginosis and trich causes pH to sky rocket above 5.0.

How To Use: After swabbing the outer skin of the vagina (approximately 5 cm into the mid vagina), wait 10 seconds to check the tip. If the tip remains yellow, your acidity is normal and you may have a yeast infection that could likely be cleared using a non-prescription treatment. If it turns blue or green, hightail it to your doc for further testing and treatment.

The moral of the story is this: It might not always be a yeast infection, ladies. Test it before you treat it.