When I posted this rather random question on my personal Facebook page last week, I got a flurry of responses quicker than the time I posted a pic of my dog wearing a xmas sweater. I know nothing about boxing or hockey but I wanted to know what my friends thought after the National Post recently reported that Mark Wahlberg challenged Tie Domi, his longtime chum of 23 years, to a friendly fight at Air Canada Center. Would you pay to see this match? And who would you put your money on? 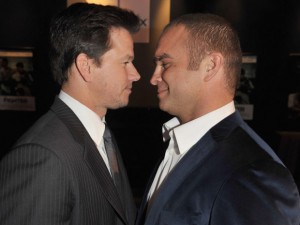 Mark Wahlberg and Tie Domi at the premiere of The Fighter in Toronto, 2010. [source: The National Post]

In less than fifteen minutes, I got the following responses (mostly from guys)…

“Domi would rip him apart! It’s not the movies!”

“Most guys will say Tie, most ladies will say Mark.”

“Best question I’ve heard all day LOL. It isn’t on ice, so I’d probably say Marky Mark. But is he all show and no go?! Neither are tall, so no reach advantage…it goes to the judges, Walberg wins in a decision.”

“Domi. Boxing and hockey are not the same.”

“Domi will sweater Wahlberg and then hammer him with uppercuts to the chin. So I go with Tie, unless of course Mark is shirtless, which come to think of it, he often is.”

“If you put Mark and Domi in a cage with no rules. Hands down Domi.”

To be honest, I don’t know enough about either of them to form an opinion, but as a girl obsessed with the t.v. show Sons Of Anarchy–where mano-e-mano fist fights break out between the bikers every few episodes – I am certain that if this Domi vs Wahlberg scenario were to play out in reality, both men would leave with pretty nasty scars. Which brings me to the skin care lesson here: Scars! Ha, and you thought I was going to impress you some hockey and/or boxing knowledge? Sorry to disappoint!

There are several different types of scars that Domi and Wahlberg could get from this fight:

There are many options to treat deeper scars including dermabrasion or a series of laser treatments performed at a skin clinic, such as DLK on Avenue, and skin grafts done by a surgeon. This procedure involves using skin from another area of your body.

While many scars fade and become less noticeable over time, something tells me that Wahlberg would opt to get them zapped off. I’m not saying that he’s a pretty boy (ya I saw him in The Fighter) but, unlike Domi, his face is his livelihood…then again, scars on guys are sexy, no? Come to think of it, after this fight Wahlberg could revive his infamous character from Boogie Nights. Dirk Diggler as Scar Face.

Now I’d pay to see that! 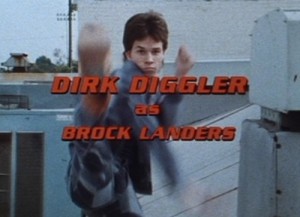 Who would you put your money on?