At 44, the most noticeable change in my face has been my eyes.  The fresh and awake appearance I could usually count on even after a night of Moscow Mules – had evolved into a slightly more droopy, hooded look than I was used to.  I called it the grumpy frumpy. With a genetic predisposition to eventual full-on hush puppy eyes, I wanted to do something about it.

I first attempted “brow lift” botox injections, but it left me not looking like myself.  Because of where the muscles are in the face, botox can only lift your outer corners of the eye, and not inner. In my case, it left me looking a bit “Dr. Spockish” and left a diagonal crease over the eye lid when I made certain facial expressions.  It just didn’t look natural, and because this is due to the combination of botox and the nature of anatomy, this result can happen no matter how good your doctor is.

Blepharoplasty and Thermage for eyes were my other options.  Blepharoplasty is an invasive cosmetic eyelid surgery that takes weeks to heal, while Thermage is a one-hour procedure using radio wave frequencies and incurs no down time. I first heard of Thermage in an interview with 41-year old Gwyneth Paltrow, who revealed she is dedicated to the procedure and as a result does not do any botox.

When I spoke with my doctor about potential results, he told me those in their 30s and 40s garner the best results with Thermage, as it works to encourage the body to build collagen using the collagen you already have, resulting in tighter skin.  So, he felt I would get a better result, than say, someone in their fifties.  I had done my research and asked him about Thermage vs a competitor called Ulthera.  He told me he had an Ulthera machine in his office and yanked it out, as patients felt it was too painful.

No pain, no gain

As I later found out, pain is a bit of a factor with this kind of procedure.  Essentially, you’re subjected to blasts of intense heat pressing against what feels like bones and nerves.  That sounds nasty, but some areas of the face are more sensitive than others, and the pulses occur in the spot only once and for a mere second or two.  The experience is not unlike an IPL laser session, if you’ve ever had one of those – but slightly more intense. By the time the whole procedure was done, I was more worn out from the anticipatory body clenching than I was from any actual pain. There was no redness and I went out the night of my Thermage looking no different than earlier that day.  My results, however, were subtly immediate, which was pleasing, as it takes 6 months for full results.  I am now three months into my results and would do Thermage again. Though the procedure is relatively pricey (ranges from $1800-$2500), results are said to last up to two years.  If I had continued with botox, that would have added up over a two-year period and in the long-term, not been that different in cost, really.  In fact, as a preventative measure, I regret not starting Thermage in my thirties. For me, Thermage was win-win: awakened eyes with a natural looking result. 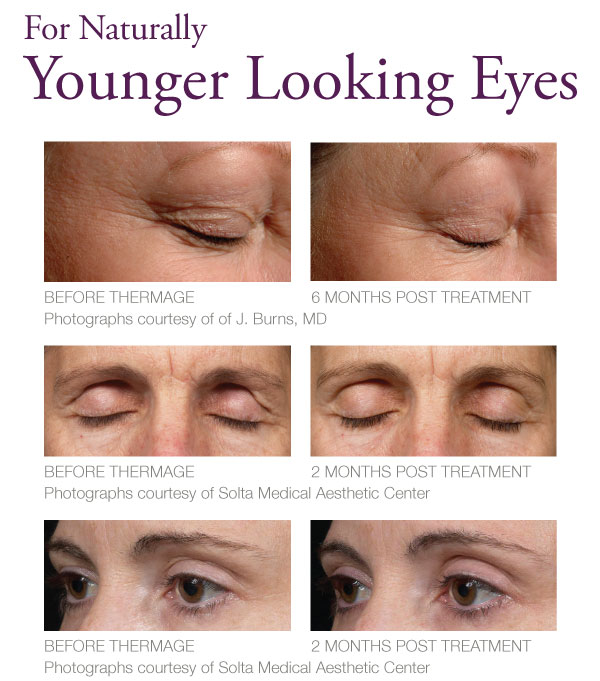 Watch a woman get eyelid Thermage done in this video. Our go-to dermatology clinic in Toronto, DLK on Avenue, offers Thermage. For more info on the technology, click here.

About the Author Samantha Bloom is a freelance travel writer and a huge skin care skeptic. Her next cosmetic venture? To rid of the sunspots she has accumulated from bumbling around the world and writing about it.