While it seems like everybody you know has a tattoo (or two or three), according to the American Society for Aesthetic Plastic Surgery (ASAPS), the number of people undergoing laser tattoo removal increased 43% from 2011 to 2012. Tattoo regret plagues nearly one-third of people, confirms a recent survey by The British Association of Dermatologists. Freelance writer Cait Davidson investigates the history of tattoo removal.

1983: One wheel squeaked and vibrated on the gurney carrying Zach Vanthournout to the operating room. Almost too clichéd – was the wheel damaged from some unknown previous trauma? The surgeon had patted his left thigh when he first laid down on the rolling bed, “We’ll take the skin from here.” Fear rattled through Vanthournout’s mind as the lights passed overhead. Would the surgery get botched leaving him horribly disfigured? Would they screw up and make off with his spleen by accident? 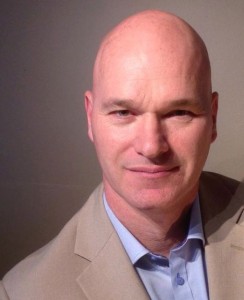 The gurney is pulled into the operating room and an anaesthesiologist hooked Vanthournout up to the IV that will put him under. 100… 99… his arm is getting cold… 98… 97… 96…

“The pain… was all over my body,” he remembers drifting awake he felt a warm hand on his, he squeezed it and realized it belonged to the recovery room nurse. Had he squeezed too hard and hurt her? He couldn’t move his right arm, a huge bandage held it in place from shoulder to wrist. Did the skin graft go wrong?

“What the f—k did you do to me?!” Vanthournout recalls shouting. The fears from before the surgery returned, a disfigured arm and missing spleen the greatest terror. Later the nurse cut away most of the bandage – it had only been wrapped to keep him from moving the arm.

Vanthournout was left with a four-by-four-inch scar on an otherwise un-mangled arm. His leg had two “race stripes” of two-by-eight-inch scars where skin had been removed.

The operation had been a success, removing the large tattoo of a skull over a set of crossed pistons with flames shooting out of the top. Which Vanthournout got in the spring of 1982, as a result of intoxication. He was fortunate that the military paid for the removal, many others endured the pain for the pleasure of being tattoo-free.

In 1983 tattoo removal was a serious surgery. Vanthournout spent a couple of weeks in recovery. At the time he was training to be a mechanic in the military and spent several weeks doing light desk duty after his recovery.

2013: Laser removal is currently the gold standard method of tattoo removal, having developed away from the skin grafts in the late eighties. Instead of a hospital, you can now get your tattoos zapped off at a medical skin clinic, alongside other cosmetic services like Botox and laser hair removal. Laser tattoo removal requires no anaesthetic and downtime is just one week. 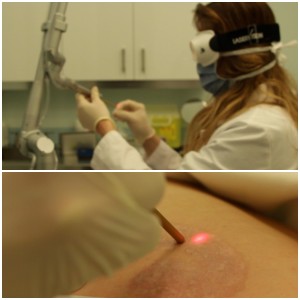 The Q-Switched Ruby Laser is considered the industry’s gold standard among pigment-busting laser machines. It works by pushing light into the skin that destroys the pigments in the tattoo without damaging the surrounding skin. “Usually it heals well without pigment change or scarring,” says Toronto cosmetic dermatologist Dr. Lisa Kellett, who has been removing unwanted ink for about twenty years.

Despite the sophistication of the machine, due to the lack of regulation in the spa and medical aesthetic industry, there are many small businesses across Canada that have people who are not regulated as  carrying out tattoo removal. (Most states in the U.S. have regulated the sector). In recent years Dr. Kellett has seen a surge in patients who have been scarred by both poor tattoo removal and application techniques.

At DLK on Avenue, the skin clinic of Dr. Kellett, the medical aestheticians and cosmetic nurse on staff do not perform tattoo removals. Only Dr. Kellett is qualified, with laser surgery education from Harvard, to perform the procedures.

This patient of Dr. Lisa Kellett had six sessions of laser tattoo removal.

Laser tattoo removal is a time-consuming and expensive treatment – since multiple treatments are required to fully remove the ink, it can cost on average three times the amount you paid for the tattoo. “Removing a tattoo is more expensive than getting it in the first place,” states Dr. Kellett, who adds that a small subset of people opt to just lighten it up enough to cover it with makeup.

None of these were an option in Vanthournout’s day when painful skin grafts were the only way to remove a tattoo. Remorse kicked in soon after he got inked.

Vanthournout recalls how the scene from An Officer and A Gentleman where Richard Gere’s character hides his tattoo in order to get into officer candidate school stuck with him. He started to worry about his career opportunities. He was in the military, but not many ranking officers had tattoos as loud or large as his. That was 1982 – have things changed? The Skiny asked some HR experts.

Are tattoos bad for your career?

Melanie Benwell, a Toronto-based corporate recruiter at PathWorks,  cites a 2013 survey  where 61% of HR managers said a tattoo would hurt a job applicant’s chances. That said, Benwell says that it can depend on the industry: “In the past, I felt strongly that visible tattoos were career limiting. However, it seems that today, especially in creative industries, visible tattoos are becoming more acceptable. If one is thinking of going into banking or consulting, or any other more traditional sector I would strongly advise against getting that butterfly on your forearm, and instead get a tattoo where it can be easily concealed. But because one can never really know what direction their career will take them, I would personally recommend against a visible tattoo so as to eliminate any potential career limitations later in life.”

Steve Harper, a technical recruiter with Hire Source in the US, works nationwide to place clients with their ideal candidates. As far as Harper’s aware, none of his clients have any official policies on body modification. However, “it is naïve to think that some old school hiring managers may not discriminate based on their own personal belief as to what is and isn’t appropriate in the work place.” Harper says that many non-offensive tattoos will not be a hindrance on someone’s potential for being hired in most instances. He says that because Hire Source doesn’t work onsite with any of their hiring companies, personal appearance “will never be a factor in whether or not we submit a qualified candidate.”

But Starbucks Canada has a policy of no visible body modifications (and even mandatory natural hair colour). According to Tyler Watt, a barista at Starbucks, there is a “company-wide policy that tattoos aren’t allowed or at least can’t be visible.” He went on to explain that he has two of his own tattoos that he has to cover while he is at work. This supports Harper’s assertion that while tattoos do not necessarily demolish employment potential, it also does not guarantee the right to openly display the art.

In hindsight Vanthournout says of his previous flaming skull tattoo, “it wouldn’t have made a difference, I don’t think”. It may not have stopped him from moving up in the ranks if he had kept it – but without it he was eventually promoted to Warrant Officer, one of the highest ranks a non-commissioned officer can reach in the Canadian Forces. In May, 2002 he saved a man’s life that resulted in being awarded the Medal of Bravery in September, 2003.

Today Vanthournout proudly sports a new tattoo, “I got it for my 50th birthday, in memory of my father and mother and my Belgian heritage. This one I wear openly, it was thought-out and means much more to me than my ornate display of my youth.” He sees more ink in his future – well-planned and discreet though – to celebrate the lives and accomplishments of his children.