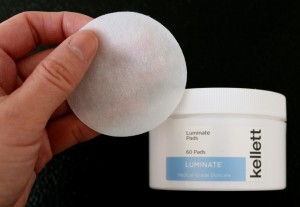 After a month of using the new “Luminate” depigmentation pads compounded at Dr. Lisa Kellett’s dermatology clinic in Toronto, I’m convinced that they are working. The stubborn brown spots on my right cheek and upper lip area are fading before my eyes. Along with several mild acids like salicylic plus the skin-lightening compound kojic acid, the key active ingredient is arbutin – hailed as a safer alternative to the controversial yet effective hydroquinone. Here, our beauty chemist Louise Hidinger gives us The Skiny on this promising new skin lightener.

Skin lightening is often desired for cosmetic purposes, to fade or lighten hyperpigmentation. Hydroquinone is considered the gold standard in skin lightening agents, but it is banned from use in a number of countries, as it is believed to have numerous health risks associated with long term use. Based on animal studies, it may also be a potential carcinogen. Because of the perceived health risks associated with hydroquinone use, dermatologists and cosmetic formulators have been looking for alternatives to hydroquinone that can achieve the same lightening effect.

Arbutin is a naturally occurring derivative of hydroquinone. It is believed to be one of the best alternatives to hydroquinone, as it provides the skin-lightening effect of hydroquinone, but it does not appear to have the same health risks. It is now found in a variety of skin care products aimed at lightening skin pigmentation.

Where does it come from?

Arbutin, also known as b-arbutin, occurs naturally in several different plant species. Plants with the highest known concentrations are bearberry and mulberry. It is also found in blueberry, cranberry, wheat, and pear varieties.

Bearberry has been used for centuries in Europe and North America as a traditional medicine. Before the discovery of modern antibiotics, bearberry was one of the few known naturally-occurring anti-microbial medicines. The antimicrobial activity is due in part to the presence of arbutin. Bearberry is traditionally used to treat urinary tract infections.

Synthetic forms of arbutin, a-arbutin (an isomer of b-arbutin) and deoxyarbutin, can be created by chemical synthesis or by an enzyme-catalyzed process. In in vitro studies, both of a-arbutin and deoxyarbutin appear to have a stronger inhibitory effect on melanin production than b-arbutin.

How is it applied to the skin?

Arbutin is typically applied to the skin in the form of a mask, a serum or facial cream/lotion. It is often combined with some form of exfoliation (e.g. a retinoid, a chemical peel or microdermabrasion), in order to speed up the sloughing off of pigmented dead skin cells to reveal less pigmented skin below. In order to maximize the skin lightening effect, arbutin products must be applied daily for a period of at least 4 weeks, and strict sun protection/avoidance must be practiced.

How does it work?

In addition to its innate inhibitory effect, arbutin may also act as a reservoir that slowly releases hydroquinone. Once absorbed into the skin, enzymes within the body can cleave off the sugar group from arbutin, releasing hydroquinone. This acts like a built-in safety valve, preventing the skin from being exposed to too much hydroquinone at once.

How good is the evidence?

Researchers have been studying arbutin’s ability to inhibit tyrosinase in skin cells, since the 1990s.  There is promising scientific evidence to suggest arbutin is effective as a skin lightening agent, particularly with regards to the synthetic forms, a-arbutin and deoxyarbutin. However, most of this evidence is from animal studies or in vitro studies on cultured human skin cells. At the moment, clinical data for arbutin is limited. There are yet to be any human clinical trials to determine the minimum concentration and dose rate of arbutin that is necessary to provide skin lightening.

About the Author Louise Hidinger, Ph.D., is a chemist and founder of the blog INGREDIENTS.