From 1970 to 2009, the incidence of melanoma increased by 800 percent among young women. 24-year-old Casie Hagelberger from Columbus, Ohio is one of these young women. A cheerleader in high school, Hagelberger was pretty, poised and popular. Today she is a stage 3 cancer patient and never leaves the house without a hat, sunglasses, and sunscreen with SPF of 50. Here’s her story.

I used to love lying outdoors, and would wear SPF 4 at most. I started using tanning beds when I was a freshman in high school. I was a cheerleader and always wanted to be tan for games and special events like prom. I tanned anywhere from one to three times a week in high school. It was a form of relaxation – after a stressful or busy day, it was nice to lay down and unwind in the warmth of a tanning bed. Never once did I feel guilty about tanning, I was young and uneducated about the risks. Tanning became a habit, and I always felt that I looked better with a tan.

A week after graduating from University, I noticed a small freckly bump on my lower back, while showering. At first I didn’t think much about it. I thought it might even be a zit. It became really itchy, and kept changing in size, color and texture. When home for Thanksgiving, I showed my mom because I knew it wasn’t quite normal. We made an appointment with a dermatologist. The doctor said it appeared to be a bug bite that I had itched too much, but took a biopsy just to make sure. I went back to my normal life, feeling relieved that it was probably nothing. When the call came a week later saying that the biopsy results had come back, I just remember running to the computer and Googling “melanoma”. I knew nothing about melanoma and it really scared me reading more into it. I had never realized there is a skin cancer that is capable of spreading to your lymph nodes and from there to organs, which can end your life.

I had my first surgery to cut the melanoma out a week before Christmas. My parents and I had to leave our family Christmas party early, in order to go to the hospital. The doctor cut the melanoma  and an inch circle around it and pulled skin to cover the area, which resulted in a six inch scar. I also had a lymph node dissection in my groin lymphs, to see if the cancer had spread. This also came back positive, meaning the melanoma had spread to my lymph nodes. I was shocked and devastated at this news; I was out to lunch with my boyfriend and his parents (my husband and in-laws now) and I broke down. We had to leave the restaurant before ordering. I just kept thinking that this was not real life. I was so scared for what was to come. I was hoping my that the melanoma could have been cut out and done with after my first surgery, but I was back in the operating room for my second surgery in January. 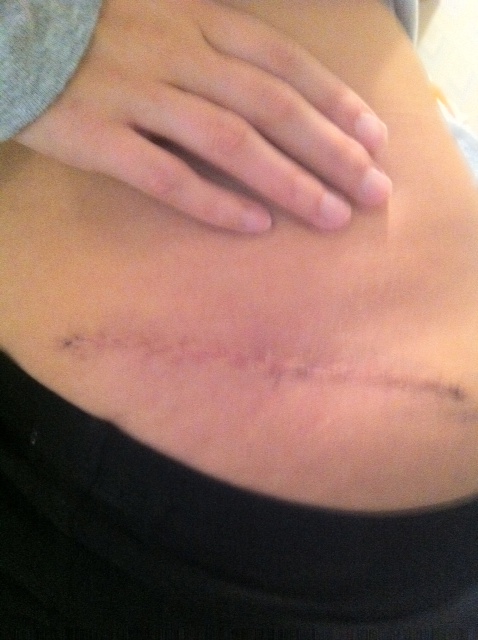 This second surgery left another six-inch scar, this one is from my groin to hip. Doctors removed all lymph nodes in my right groin area. In order to reach all of the lymph nodes, they had to cut a muscle in my leg and reattach it. Recovering from this surgery was difficult. In the hospital it was so painful to even get out of bed that I would cry from the pain. I couldn’t walk more than a step or two without getting dizzy and feeling sick. It took me a month to be able to walk again. I had a drain tube for three weeks, and it was impossible to shower while holding it, so my mom would stand outside the shower holding my drain tube.

I went from being a college graduate that lived a pretty independent lifestyle, to living with my parents and relying on them for everything. I felt like my independence, privacy and my normal life had been taken from me.

Once I healed from this surgery, I started interferon. My dad would drive me to the medical center every morning and I would be there for three hours everyday, Monday through Friday, for five weeks. I would keep my IV in the whole week, which was always hard to sleep with at night. The effects of interferon are similar to chemotherapy. I was always exhausted and nauseated, most days I didn’t even want to talk because I did not have the energy. I had headaches and loss of appetite, and almost any other side effect you could think of. The interferon hurt my liver and so I had to have blood tests most days before I could start my treatment. I lost two-thirds of my hair as a result from my treatment. I would clean out my hairbrush almost everyday because of the large amount of hair in it. Losing my hair was extremely hard for me, and it took a really long time for me to become comfortable with it. It has been a year and a half since my diagnosis and the hair that I lost is now regrowing, so I have thick hair for about five inches and then my thin hair that survived the interferon. 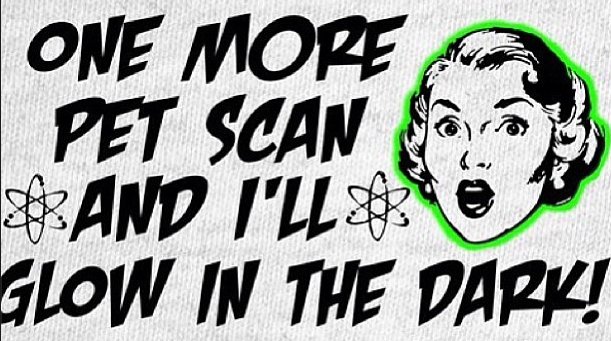 Now I have checkups every four months, at which I have a PET, MRI or CT scan, a dermatology appointment and a blood test to make sure melanoma hasn’t reappeared. It is almost impossible not to have anxiety when I go into these appointments. I always hope for the best news, but I also need to be prepared for the worst news. But the reality is I have an aggressive form of cancer (stage 3), and is very fast spreading. Cancer in stage 3 means that it has spread to my lymph nodes. If melanoma is caught early, there is a chance it can just be cut out, but with stage 3 it has already spread. Stage 4 means it has spread to internal organs.

What I want young people to know

Being tan is not worth the risk of skin cancer, and melanoma can take your life. There are so many spray tans and tinted moisturizer options these days, that there is really no need to expose your skin to harmful UV rays. I find it astonishing the amount of young people that often joke about skin cancer when they have sunburns. Skin cancer is real, it is more prevalent than ever and it can take your life.