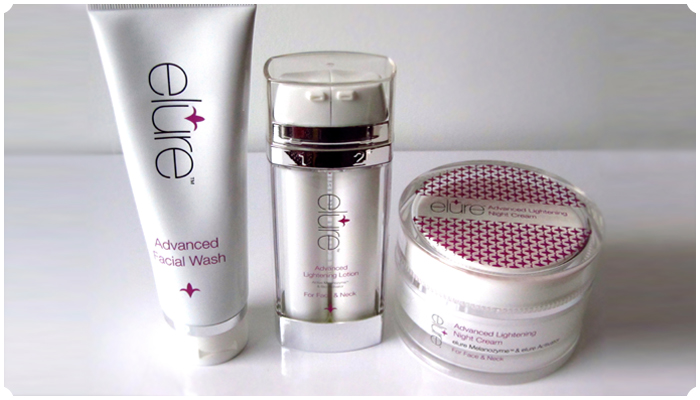 I’ve been using the Elure Advanced Skin Lightening Line since it hit Canada back in April. I was told by a company rep for Sigmacon, the Canadian distributor of Elure, that I’m one of the first Canadians to test this line out. It was exactly one year ago when I first saw this innovative product mentioned in Allure’s October 2011 issue in an article titled “The Big Breakthroughs.” The Elure Lotion meant for daytime use has since been hailed by Allure editors as one of the “50 Beauty Products to Buy Before You Die.”

The line debuted in Hong Kong in 2009, and was tested on 30 chinese women in a clinical study. The Asian population is the biggest market for hyperpigmentation products because people of Asian origin tend to get sunspots much earlier than Westerners. As a Chinese Canadian, I can attest to the fact that we see spots form as young as age 30, while caucasians usually get brown spots at age 40 or older. My 58-year old mother’s face is scattered with age spots across her cheeks. Derms have told me that lightening products typically take at least 3 months to see results. The company-led study, done on thirty Asian women at aesthetic hospitals in Beijing, showed improvements in skin tone, texture, and overall whitening in just four weeks. Pic below is of one of the study subjects… 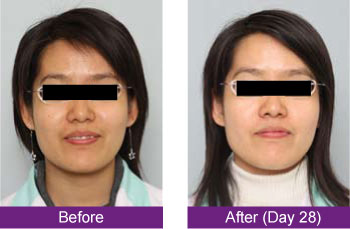 To give you a clear idea about how Elure works, here’s a breakdown from the aforementioned Allure article.

THE THEORY BEHIND IT:

Most lighteners, including hydroquinone, which is the dermatologists’ gold standard, are only able to address dark spots by blocking the production of melanin deep within the skin. If no new discoloration rises to the surface, the splotch eventually fades. But it’s an imprecise science: Sun or irritation (sometimes caused by the very ingredient treating the spot) can trigger more melanin, working against the process. Scientists have long been looking for an ingredient that can dissolve hyperpigmentation right on the skin’s surface, and the creators of Elure have done exactly that.

A mushroom-derived enzyme called Lignin Peroxidase (originally formulated in the 1980s to whiten paper) is the star ingredient. Lignin Peroxidase is trademarked as “Melanozyme” in the Elure line, and this substance targets and breaks down spot-making melanin that is already on the skin. Applied in two steps – one chamber contains the enzyme, the other an activator that kick-starts the process), Elure’s day and night creams immediately begin breaking down melanin down into small, colourless molecules that are whisked away with exfoliation.

The line contains a foaming cleanser, a day lotion, and a night cream. The cleanser effectively removes heavy makeup and left my face feeling ridiculously squeaky clean the first time I used it, which I liked! I thought maybe it would strip my face too dry but the night cream provided plenty of moisture. The day lotion is lighter in texture, but because I wore sunscreen underneath, my face felt pretty heavy after applying my usual Dior tinted moisturizer on top. After a week of using the whole line, my face felt pretty oily and I broke out a bit so I stopped using it to give my skin a break. After a three-week break, I returned to it with a different approach. This time I combined the night cream with a 4% over-the-counter hydroquinone cream (Neostrata HQ Plus), applied just on two stubborn sunspots on my right cheek. After five months of regular use (with sunscreen and OTC hydroquinone), I have noticed that my skin tone is more luminous overall. But as for my sunspots, I can’t say that Elure faded them significantly. 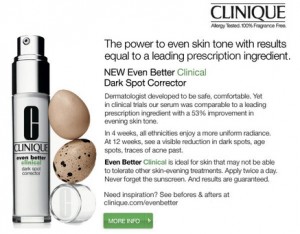 Now, hyperpigmentation is notoriously difficult to treat, and to be completely honest, I have yet to see impressive results with ANY topical lightener on the market. In the past, I have used the famous Clinique Even Better Dark Spot Corrector (the egg ad! See left), Shiseido’s White Lucent line, and the Skinceauticals Pigment Regulator (with kojic acid: meh). That being said, I’ve gotten the best results with Elure so far. Would I recommend this line to my speckled-faced friends and mom? Yes, especially if you have dry, mature skin. It may be too greasy for those with oilier complexions. And be loyal to it. Lightening products take time to kick in. Also, I would imagine you would get even greater results when you combine this line with clinical treatments such as chemical peels or lasers, which are proven to work quicker than creams.