My face feels hot as I type this into an email to a girlfriend who I have dinner plans with, “Forgive me if I look a little flushed in the face tonight. Just got back from zapping my acne scars.”

The treatment: ProFractional at DLK on Avenue with their nurse Diana Phillips. 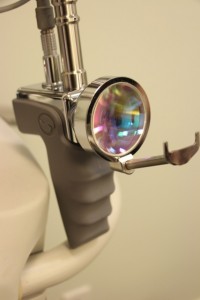 This laser works to deeply restore skin. Over a series of treatments, deep acne scars and wrinkles will plump up and diminish in appearance.

It’s all about how lasers work.

The ProFractional laser targets damaged tissue (in my case, tough scar tissue) by creating tiny microchannels beneath the skin’s surface. This stimulates the skin’s natural healing process to form skin-renewing collagen. As damaged cells are replaced with new and healthy tissue, your skin appears fresher and younger with improved tone and texture.

It’s deep skin restoration from the inside out. You need to create a bit of damage to see real results. And I’ve seen impressive results so far, albeit I’m not quite ready to show you my after photos. Give me some more time.

I’ve had three sessions so far, spaced a month apart. There is a about a week of downtime when you look a little “messy”, as you can see from my photos above. The redness looks much worse than it really feels! After two days, you can cover up the scabs with concealer. After a week, your skin looks visible plumped and restored significantly. Scars look less deep, and tone is supernaturally even-looking.

What does it feel like? I’m not going to lie, at first it was painful, even with numbing cream. But it gets easier.

Each zap lasts about ten seconds and feels like a tiny construction worker drilling a deep hole into the skin.

When I told Nurse Diana this, she laughed and said “Think of the little guy as a ‘reconstruction’ worker!” So that’s what pops in my head now: a little dude in a yellow construction hat reconstructing my acne scars.

Visuals help take away the pain sensation. My pain tolerance grew with each successive session. The second and third sessions felt much more tolerable and quick. Now I just summon up the image of the little re-constructor worker and before I know it, the treatment is over, and I’m that much closer to radiant clear skin. If I had to rate the feeling on my Pain-O-Meter, it would be high, but keep in mind that it is quick and worth it.

Cost per treatment is $900, for more information and before and after pics click here.

When I tell people I do laser treatments, I seem to always get the question “is it Fraxel that you do?”

Fraxel is a non-ablative laser that is very popular in medi-spas, and it’s used for the same purpose of restoring and repairing damage skin. I have not tried it yet, but would like to for comparison.

From my conversation with Phillips this morning, this is how I understand the difference:

ProFractional is a new generation ablative laser. It creates tiny micro channels beneath the skin’s surface, than ablates it or evaporates the damaged tissue completely. It removes this debris and unnecessary heat. The micro channel is now empty. This allows the good tissue around it (new skin) to fill the empty channel.

Fraxel doesn’t ablate or evaporate tissue. It does go in the skin and heats it, but it leaves old treated tissue and heat behind in the channels. The theory may be is that the surrounding skin must now break down this trapped debris before rebuilding new tissue. That may be the crux of why ProFractional works better than Fraxel. It’s a cleaner treatment, says Phillips.

So because the ProFractional instantly removes debris and unnecessary heat, providing the same degree of collagen renewal as the Fraxel (without the irritation, sloughing, and prolonged swelling), it’s thought to be superior.

Have you tried the the Fraxel or ProFractional laser? If so, let me know about your experience below.