Much like adult acne (a topic that we cover a lot here) toenail fungus, though unsightly, is not life threatening. But for those who have had it, can attest that it is a major confidence sucker because it can grow, spread, and take forever to grow out. Who wants to hide behind nail polish all the time?

Skin-speak for a fungal infection of the nails is called onychomycosis, and it is more common than you think. In fact, onychomycosis accounts for one third of fungal skin infections and population studies show that there over 2 million people in Canada living with it.

Onychomycosis happens more on the toenails than your fingernails. It begins with a white or yellow spot under a nail and can affect one or more of your nails. It can go away on its own or it could lead to the gradual destruction of the nail plate.

I’ve had it on my left big toe when I was younger and it took over a year for the crusty yellow stripe to grow out. I recall wearing dark red on my toes throughout that winter to prevent my then-boyfriend from catching a glimpse of it.  Normally, l like to give my toes a polish break in the wintertime. I blamed my toenail fungus on an inexpensive pedicure that I had done a few weeks before, but it might have something to do with genetics as my mother’s baby toe on her right foot has always been dark and crusty looking, almost like dead wood.

So what causes Onychomycosis?

According to various sources the risk factors include: Genetics, wearing closed toe shoes for long periods, and frequenting unclean nail salons are some of the risk factors for onychomycosis, but the biggest one is simple aging. In a 2010 article called Toenail Onychomycosis: An important Global Disease Burden published in The Journal of Clinical Pharmacy and Therapeutics reported that the prevalence of nail fungal infections rose significantly in people aged 40 and up.

Traditionally onychomycosis is effectively treated with anti fungal drugs prescribed by doctor, who needs to surgically remove some of it and sent it to a lab for diagnosis. Penlac is a popular RX option that comes in a liquid nail solution, cream, and lotion form. Applied on the affected area once a day, Penlac clears mild to moderate onychomycosis in about 48 weeks. There are also stronger oral anti fungal treatments available that work faster, however as with many oral medications, they do come with potential side effects. 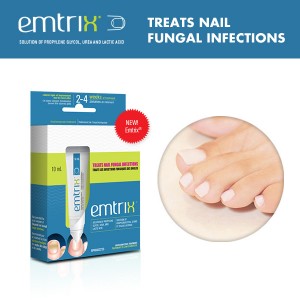 There are several over-the-counter options available including the new Emtrix, a liquid nail solution packaged in a 10 ml plastic tube with a silicone drop tip.  I was invited to learn about Emtrix at their media launch at the Trump Hotel Spa last week. Developed by Paladin Labs (the same lab that developed the morning after pill), Emtrix is a medicinal blend of propylene glycol, lactic acid, and urea.  According to the company’s research, Emtrix is “the only OTC that is indicated for the treatment of nail fungal infections. Studies show that it has efficacy similar to Penlac, but works in half the time.”

24 weeks to clearer healthy nails? Sign me up! This is good news for consumers because the thing is, very few people actually seek medical help from their doctors for nail fungus. Instead the more common thing people with nail fungus do is what I did in the past: wait for it to get better on its own or just accept it as a part of life (as my mother has).

Emtrix can be extremely useful for athletes and people who have to wear closed shoe toes every day for work (i.e. nurses, medical aestheticians, doctors). And of course, women who love getting manis and pedis regularly (nail junkies, raise those polished digits!). The only bummer is, you need to apply Emtrix on clean unpolished nails in order for it to penetrate the nail matrix. So if you’re hiding ugly fungus behind pretty polish now, wait until the end of summer when Emtrix ($40) becomes available at mass market drugstores to start your fungus-fighting routine. 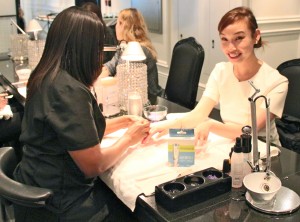