People are always asking me about lash extensions. When they started gaining momentum a few years ago, I got the chance to interview several leaders in the industry including Nathalie Smith, the bubbly owner of Mync Lash Lounge & Brow Bar, which now has two locations across Toronto—one downtown and one uptown.

Several published stories later, including this older post, I feel like I know all there is to know about lash extensions—except for the fact that I’ve never had them done before…sort of like when you feel like you’ve seen the movie already, just from watching the trailer so many times.

So to see what all the fuss was about I decided to put the Latisse on pause and finally try lash extensions on for size.

After all, everyone and their mother are doing it.  No joke. When I visited Mync’s Yorkville location, the posh pink and white, airy space was surprisingly packed with women of all ages, which made me revisit my apprehensions about wearing fake fringes.

Why I’m late to the lash party 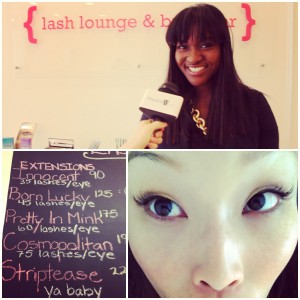 What I’ve always taken away from reading and writing lash extension articles is that when they are done with an experienced technician who uses quality materials and takes the time to properly position them (a full session should never take less than half an hour), lash extensions can completely refresh your appearance by making your eyes look bigger and more feminine. That’s what Nathalie confirmed on camera when I interviewed her, for a separate video project that I’ll post very soon (teaser: it’s about wedding day prep).

Before starting on me Ivy, a lash technician at Mync, told me that the 60 lashes per eye from their “Pretty in Mink” package ($175) would look best on me, stating that I would look as if I’m wearing 3-4 coats of mascara.  She added that because my natural lashes were in good condition (thanks Latisse!) they could support the longest length, 12 millimeters. Ivy said with confidence, I would get a lot more lift and curl with this length.

The session lasted a little more than an hour, and I was asleep for most of it. No stinky fumes in the air, and no loud obnoxious music blasting. Everyone was extremely profesh.

Ivy was right. I love the look—I feel 80% prettier! And what’s even better is that I don’t need to wear a stitch of eye makeup. The feel of the lashes are light and soft—much lighter than strip falsies or even natural lashes coated with mascara. I did not expect them to feel as natural as they do, and the maintenance has not, in any way (yet), been disruptive to my normal routine.  The only hindrance was the two days of sleeping on my back, which was tough since I’m an unalterable side-sleeper. It’s only been a week since I got them done, but so far so good: no stray lashes have fallen, I’m spending less time in the mornings getting ready, and I got an extra scoop of ice cream at Dairy Queen on the weekend by batting my luscious lashes at the guy at the counter. Strange new confidence is an after effect, I suppose!

This could get addictive.

October 2013 Update: Since this post, I’ve been back to Mync once for a refill with Nathalie.  I went to another place to get a semi new set last month, but the results and service weren’t as impressive as Mync’s. Moreover, my eyes stung afterwards and got slightly inflamed when I got home. It all calmed down by the morning but the experience made me yearn for Mync’s signature touch.

Today I saw Ivy for a “Born Lucky” (45 lashes per eye). She was the first aesthetician that did my lashes the first time at Mync (see before and after pic at the start of the post). Ivy is amazing! Her touch is so gentle and her technique so swift that I fell asleep throughout the hour and a half session (the cozy blanket helped, also). Staying asleep was easy because I felt no tugging, no poking, and best of all when I was told to open my eyes, there was no stinging and my new faux flutter felt feather-light. Beauty bonus: Ivy gave me a subtle cat-eye look that makes me feel extra purrty.