This article was written by Toronto Star reporter Robert Cribb, published in October 2009. The information is still relevant and up-to-date, with the addition of a new alternative to Botox called Xeomin.

As the Botox-infused needle pierces the skin around Howard Lende’s left eye, the resulting wince produces the furrows he has earned over 46 years.

Slowly, the needle’s clear liquid contents empty into the Toronto real estate agent’s face in a ritual that is becoming increasingly common among men of a certain age anxious to smooth out the wrinkles.

The pursuit of age restoration, once the exclusive realm of beauty-seeking women, is now a distinctly unisex endeavour.

Lende sits in the bull’s eye of the male cosmetic procedure demographic: Mid-40s, successful and in an industry where appearance – especially youthfulness – is essential to success.

“Presentation is part and parcel of the industry,” says Lende. “If you’re happy with your face it gives you more energy and vitality. It’s not always inside out. It’s often outside in.”

Achieving the new 30 when you’re in your 40s comes with options.

There are creams and toners. There is full-on cosmetic surgery. And then there is the kind of middle ground: Clinical, non-surgical treatments that plump, smooth, brighten and lift.

“We’re not going to do anything drastic, just make you look like a better version of yourself,” says Diana Phillips, the cosmetician at the DLK on Avenue clinic where Lende sought the fountain of youth.

The process included a “soft lift,” microdermabrasion and a photo facial – words and phrases not previously part of the male lexicon.

The soft lift is achieved by injecting a combination of Juvederm (which promises to restore volume in hollowed-out cheeks and smooth out folds around the nose and mouth) and Botox (designed to turn back the clock on frown lines and crows feet).

The Juvederm filler treatment rings in at $600 and up for a single treatment requiring a touch-up every six to nine months.

Botox treatments, which must be repeated every three or four months, cost $350 and up for each session.

“Men are slowly starting to realize there are options out there that will not drastically change their looks; rather, just make them look and feel younger,” says Dr. Lisa Kellett, the Toronto dermatologist who owns the DLK clinic. “The benefit is that there is no surgery so, therefore, no downtime and more reasonable cost than surgery.”

The before and after pictures [below] tell the story. Weeks after his procedures, Lende does appear more rested and even youthful. 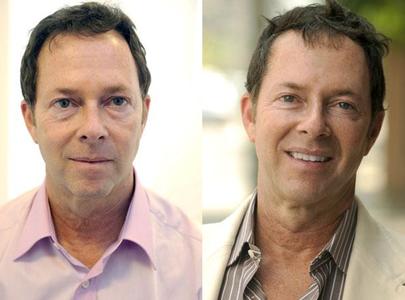 “I thought it was a subtle but distinct transformation,” he says. “It’s not a matter of wiping years off your face. But stress and exhaustion do dissipate. It’s kind of like Photoshopping your face.”

Vika Goodale, owner of Yorkville’s Vikaspa, says there are days now when she sees more men than women.

“Men absolutely love facials and pedicures,” she says. “When you have younger and younger and smarter guys coming in looking for your job, grooming is a big way of keeping up.”

Plastic surgery, a more dramatic aesthetic approach that our fathers and grandfathers would have eschewed with a dismissive wave of the hand, is also on the rise among contemporary men.

“It’s a cultural change,” says Dr. Nicholas Nikolov, a Beverly Hills plastic surgeon who has recorded a 30 per cent increase in male clients over the past three years. “The perception is that people who are energetic and capable look youthful. Patients want to look younger so that the outside matches their enthusiasm and vigour inside.”