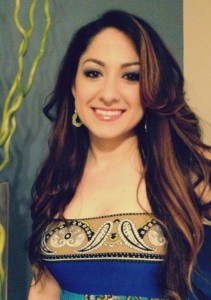 Sarah Cisneros never thought she could be at risk for skin cancer. “I’m half-hispanic, so I tan easily, and hardly ever burn.” Cisneros, a 26-year old hairdresser from Houston Texas, admits to using tanning beds “only a handful of times” in her teens, and using sunscreen only when she was at the beach, which wasn’t often. Cisneros admits, “The few times I did use it, I only put in on my face and tops of shoulders. Unfortunately, I wanted the tan.” In other words, Cisneros was a normal girl, until she was diagnosed with melanoma at age 25. Here, she tells us about her harrowing experience, and what she wants her peers to know today.

I was a newly wed, and 17 days from our honeymoon in Hawaii. The last week of September, my husband spotted a tiny black mole on my right shoulder blade—it looked more like a scuffmark on the floor, the kind your boots make on tile. It was new to my knowledge, looked odd, and for some reason I didn’t procrastinate. I was at the dermatologist October 3, 2011, and was called to hear my results two days later. I went alone.

The way my dermatologist told me I had skin cancer was cold and stern. I understand the stern part, but he actually brought a crew of fresh-faced medical assistants to stare at me as I’m learning the news for the first time. So there were 8 pairs of eyes starring at me, eyes wide, and anxiously awaiting my next move.

He told me I had stage 1 melanoma, that I needed to have surgery right away and that it would be a very large wide excision. He started off firm, then switched to happy, trying to reassure me that it was caught early and that everything would probably be ok.

I felt shocked, but also not so shocked because I suddenly remembered all the times I laid in the tanning bed. I was afraid of disappointing my husband because I may have just ruined our honeymoon. It’s weird how your mind can have so much on it and still be completely blank at the same time. I remember trying so hard to smile and look tough, most certainly didn’t want to cry in front of complete strangers. I had to post-pone my honeymoon to seven months later.

I had my surgery two days after my diagnosis. I had 5 1/2 inches of skin removed from my back. Soon after I went to my oncologist for blood work and chest x-rays. I love my oncologist—she explained everything truthfully and compassionately. With the surgery being rather large and in a location that prohibited me to raise my right arm very high, I wasn’t able to work for about a month. Since then I have had 3 stage 0 pre melanomas removed. I am NED* as of now. I thank God everyday for allowing us to catch it early.

*NED stands for No Evidence of Disease, as per the Melanoma Research Foundation.

Not out of the woods

It never really goes away, psychically or mentally.

What young should people know

Love yourself for the color you are—we aren’t supposed to all look identical! You put yourself at risk when you use tanning beds and don’t wear sunscreen.

I work in the beauty industry and I meet and work with so many tanners—young and old, but mostly young adults and teens. I struggle emotionally when I see people like this. I try so hard to get the message out, but it hurts when they don’t change and I am forced to work next to their young tan selves.

I would like to help more to change tanning laws, but I often feel like they would look at me funny because my melanoma was a “cut it out and its gone” situation. That’s what it seems like to other people, but I know it never goes away.