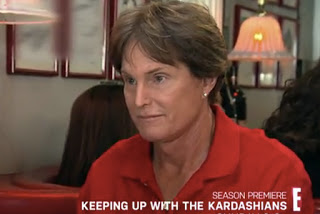 So is Bruce Jenner.

Similarities appear to end there.

Superficially, at least, they present themselves as almost entirely different species of human.

Gere’s classicly chiseled countenance, with its mischievous smirk and iconic dimples, has aged elegantly into that of a distinguished, silver fox raconteur still in command of the power to weaken female knees.

Compare this with the over-wrought, bulging, facial plasticity that Jenner has employed in search of sustainable youth. Its creepiness serves as a high-powered repellent to the eyes of men and women alike.

In the faces of male celebs flooding into Toronto for TIFF we witness the artful – and not so artful – state of male ageing: 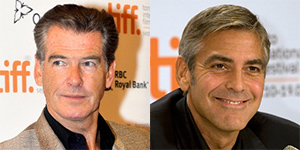 “I like the approach of guys like Pierce Brosnan and George Clooney because they obviously take care of themselves but they’re not doing anything crazy,” says Toronto dermatologist Dr. Lisa Kellett who counts Hollywood celebs among her clients. “Guys who have had too much work done – people point to Bruce Jenner and Mickey Rourke for example – it’s just too much.”

While high-tech anti-aging rituals and procedures remained within the exclusive domain of women for the first two decades of their existence, men have become increasingly lured as part of the contemporary redefinition of male aging.

While the 60-year-old man of a only a generation ago resigned himself to the ravishing influences of time and gravity, more and more of today’s post-40-something lads are raging hard.

Male adoption of time-restoring procedures such as Botox and high priced creams and toners – nearly non-existent a generation ago – have become a modern economic driver in the skincare industry.

“People used to give up at 40,” says Kellett. “But Baby Boomers are saying, I’m 50 or 60 but I’m still vital. Because people are healthier, they’re working out, they feel better, they’re living longer and they want the outside to look like the inside.”

But while the modern man may be anxious to make their 60-something exterior match their 30-something interiors, success or failure lies in the details.

The Gere-Jenner side-by-side is all the more striking when viewed through time.

A survey of both from their early celebrity days reveals the same fresh-faced, square-jawed handsomeness. But where Gere chose a path of graceful, understated transformation, Jenner sought out a clearly more aggressive approach that has resulted in a kind of Frankenstienish disfigurement.

Consider it, at least in part, a product of the Los Angeles nip and tuck culture, says Kellett.

“Their perception of beauty there is much different,” she says. “It’s like your lips have to be this shape and breasts have to be this big. When you’re there, you can lose perspective. We’re more accepting of different types of beauty here – all shapes and sizes.”

And so, classic Canadian-style moderation demands a tamer skincare regimen for ageing men: Sunscreen everyday, vitamin A and C and non-surgical procedures that keep the skin looking healthy and youthful yet natural.