Angelina Jolie’s lips may have been the result of winning the genetic lottery, but you can get her her naturally plump pout too–quickly and easily–with hyaluronic acid fillers. The key, however, to looking more Jolie and less Rinna (Lisa Rinna, circa 2009) is to seek an experienced injector at a reputable skin clinic.

While Rinna’s infamous “trout pout” was the result of silicone injections, which she had surgically removed in 2011, it is still possible to look overdone with fillers.

Kimberly Foster, a 32-year-old public relations exec in Toronto, knows all too well the tell-tale signs of fake-looking lips. “Working in the city, I meet a lot of women at events who have obvious signs of work done. If I see lips that are swollen and balloon-like, I just know,” says Foster, who works with luxury brands. According to beauty industry experts, other signs of a fake pout include:

While Foster had been contemplating lip injections for awhile, she didn’t want to leave her lips in the hands of just any one. Here, she talks to us about why she chose DLK on Avenue as the place to do it at. 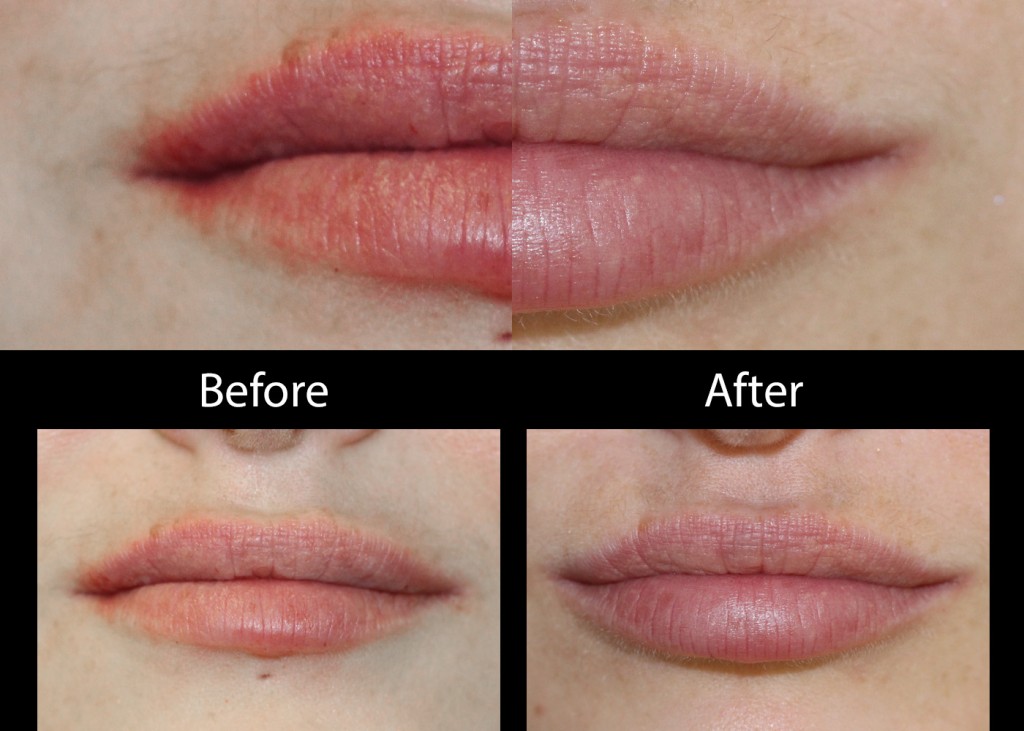 Q: First of all, how would you describe the natural state of your lips?

Kimberly Foster: Wimpy and thin! My lipstick would bleed, liner made them even smaller—clear gloss was my boring best friend. I’ve always coveted lush full lips, the kind that lets you wear lipstick and nothing else.

Q: Did you use over-the-counter lip plumping products?

KF: I relied on them! But those are only temporary and at times can give you a swollen, allergic-reaction look. Not natural at all!

Q: When did you start considering lip injections? Tell us about your research process.

KF: I began with internet research, which (naturally) included horror stories of too much being injected and Frankenstein results. I just wanted a bigger pout, nothing crazy, just a little extra than what I already had.

Q: How did you decide on where to go?

Juvederm Ultra Plus uses hyaluronic acid, a normal component of human skin that holds water and causes a plumping effect.

Q: Tell us about your consultation.

KF: Diana was wonderful, she educated me on the advantages of Juvederm and how it works over other fillers on the market. She was also very honest, assuring me that I wouldn’t walk out with the “duck lips” that I so desperately did not want. I had even brought a close friend with me to have a second opinion on the whole thing, and when she asked Diana about having her lips done, Diana’s response was  “No way, your lips are big enough, adding filler would make them look fake.” I appreciated her frankness and because I didn’t feel any sales pressure, I decided to get it done on the spot.

Q: Describe the sensation during and after the treatment.

KF: I have many body piercings but that doesn’t make my fear of needles any less. When Diana came close with the needle, I was very nervous. She told me to breathe in and that I was going to feel a little pinch…what a pinch! It happened so quickly though that it really didn’t hurt, it was more of a shock than anything, a shock that lasted only a second. I was told that Juvederm has Lidocaine in it, which makes everything go numb, so if you can wrap your head around the initial prick, the rest of it is a breeze. It was a werid sensation those first couple of seconds, from the needle going in to feeling the Juvederm being injected to feeling nothing to having Diana massage my lips. I had two pokes on each side of my upper lip, as I wanted to keep the definition of the cupid’s bow in the middle, and one in the middle of my lower lip just to even things out. The entire process took 15 minutes. My lips were slightly swollen and lightly bruised for about a week afterwards. I was anxious to see the results!

Q: It’s been one month since your treatment, are you pleased with the results?

KF: I couldn’t be happier! I feel my lips are now lush and full but not overdone. Many people can tell something is different but are not sure what, which is exactly what I wanted. Nothing dramatic, just a little extra oomph!

Q: What advice would you give to someone considering this treatment?

KF: Do your research, and go to DLK on Avenue, they know their stuff!