Meet Cynthia*. “I used to think that my tattoo was special because nobody had it, until I started seeing other women throughout the years with similar designs,” says the 34-year-old accountant of the 6-inch long sea lion tattoo on her upper thigh. Ten years after she got inked, Cynthia decided to make an appointment with Dr. Lisa Kellett, our consulting dermatologist, to remove it for good.

“I was so nervous at my first treatment that I asked to have only the bottom of the tattoo treated,” says Cynthia, but after seeing the dramatic results, she was convinced that she wanted it all off. And so began a year-long series of laser tattoo removal sessions. 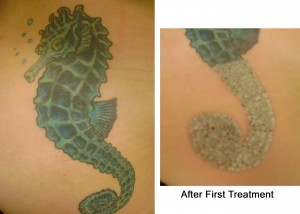 Tattoo Regret Plagues Women. Ironically Cynthia’s desire in her twenties to be different and subsequent tattoo regret is not uncommon. A 2008 paper in the Archives of Dermatology found tattoo removers were twice as likely to be women, usually white, single and collage educated, with an average age of 30. Their main motivations were social stigma, negative comments, and the fact the tattoo “no longer satisfied the need for uniqueness.” Sound familiar? If you’re interested in laser tattoo removal, watch this video below of one of Cynthia’s sessions at DLK on Avenue in downtown Toronto, where Dr. Kellett explains how the process works and what to expect.