I’ve heard people describe laser hair removal as “life changing” and I couldn’t agree more. Who doesn’t want smoother skin and the option of never having to shave or wax again? The first time I tried laser hair removal was six years ago when I purchased a Groupon for six sessions at a medi-spa for the bargain basement price of $100!  It was such a steal that I purchased one for my sister too. Back then I didn’t know much about lasers and thought they were all the same. Boy was I wrong. The laser that this place used was painful and messy (gel was everywhere!) and above all, ineffective. I used all six sessions on my underarms – an area that has always been darker and prone to ingrown hairs. During each session, I recall having to hold up a mini fan over the area as the technician zapped away, which was not easy to do when you’re both terribly ticklish and quenching in pain. At the end of the six sessions, which took six months, I definitely saw a reduction in hair growth but after four months it seemed to resume back to normal, and I was shaving and waxing my pits again the following summer. My sister didn’t even return to the place after her first “torturous” visit. Mind you, she did her lady parts. 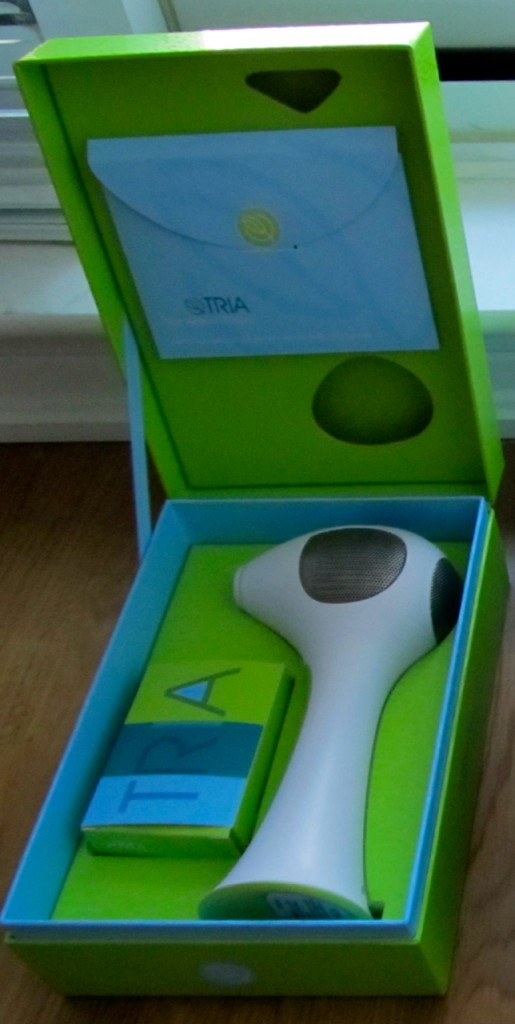 Two summers ago I received the Tria Home Laser Removal to test out for a magazine story I was writing about at-home beauty gadgets. For obvious safety reasons, these machines are much lower-powered versions of professional-grade lasers and require more frequent use. At $400, the price seems like a good investment when compared to what you would pay at a skin clinic, which can range anywhere from $600 to upwards of $3000 for several sessions. Did the Tria work for me? Let’s just say it is now collecting dust somewhere in my closet, never to be pulled out again. After six months of using it properly to the best of my ability (twice a month for the first three months, then once a month onwards until there is no more hair growth) I saw very little improvement. And I’m not that hairy! As much as I wanted this to work, it was hard to comply because I was not very motivated to spend an hour or so zapping my follicles. The tip is very small so it doesn’t cover large areas effectively. It’s not exactly painless either, so unless you enjoy inflicting pain on yourself every few days, I don’t recommend it.

I recently visited the Canadian Beauty College to learn about their laser theory course. At my meeting with the admissions director, I learned that there is a difference in performance between the types of machines used in spas, salons, medi-spas, and in doctor’s offices. I’m currently doing laser on my legs and underarms (again, le sigh) at my derm’s clinic to get them in smooth condition for my autumn wedding. I’ve had four sessions so far with their medical aesthetician Lindsay, who says that laser hair removal is the most popular treatment for brides-to-be – and also as gifts that mothers give to their teenage daughters to spare them the trouble of shaving down the road. When I heard this, I was a bit shocked. Laser hair removal isn’t exactly my idea of a good time, but after experiencing the machine and seeing how effective it is, I can honestly say that if my mom had given me a gift certificate for laser hair removal at DLK on Avenue I would be jumping for joy. It would be like receiving a gift card to Holt Renfrew versus one to Sears.

To give you a sense of what to expect, I brought my video camera to my last appointment and filmed the session. I apologize for the bad sound quality at 1:38 when I start talking about my underarms – but hey, I did the best I could lying down.