Respect the Zepp! Radio deejay Joanne Wilder will always be a rebel. She once barricaded the door while on-air, so that her boss could not stop her from playing Led Zeppelin tunes for an undisturbed hour to honor the anniversary of the death of John Bonham, Zepp’s late drummer. Wilder, in playful defiance, declared to her loyal listeners “I may or may not have a job tomorrow!” Known to her very large male fan base as that “cool rock chick”, Wilder has been keeping us, Torontonians, laughing and rocking out at our desks Monday to Friday with her show Wilder At Work on Classic Rock Q107 for 15 years. West coasters get a taste of our darling deejay from 7 to midnight, as she also hosts the evening show at Classica Rock 101 in Vancouver (pre-recorded). Here’s The Skiny on the lady who defies the one-hit wonder Video Killed The Radio Star. 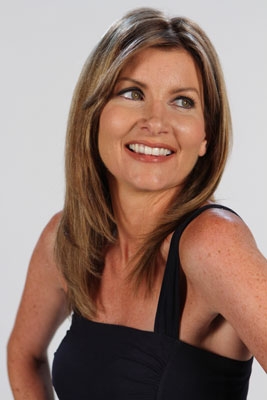 Your name and a sentence that describes you:

Joanne Wilder, wife, mom and cool rock chick. Well that last part is what I like to think, but anyone who knows me knows I’m a bit of a dork.

Your birthplace/where you call home now.

I was born in Thornhill Ontario and moved to Scarborough when I was a young kid. I moved around a bit when I first started my career in radio. I lived in the beaches, Belleville, Hamilton and North York. My husband is from the country so we lived in Beeton for 6 years but the commute killed me plus we were always driving to Newmarket for activities for the kids so we moved to Newmarket a year ago and we love it.

What drives you in a positive way and in a negative way?

I am a tiny bit competitive. My friends will say VERY competitive. Not always with others but with myself too. I always want to be better at what I do, the kind of mom I am, everything. It is a positive and a negative. Positive, in that, it got me to where I am and negative in the fact that I tend to be very hard on myself.

Describe a typical day for you (from bed to bed).

6:15 A.M. – I’m up. I would love to get in a workout before work but I have to commute during rush hour so no time for that. While getting ready for work I’m also usually arguing with my 8 year old daughter about what she wants to wear to school. Flip flops in October and pajamas because it’s cold outside? Not going to happen. I have an extremely awesome husband who does the lunch packing according to my nutritional guidelines.

8:30  A.M. – Prepping for my show: Browsing websites, reading the news and finding interesting stories and topics.

10 A.M. – I’m on air and it is pretty crazy. While on the air I’m on Twitter and Facebook, taking calls and I’m answering text messages. It is so busy there are times when I realize I forgot to eat my lunch. 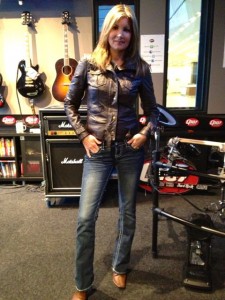 2 P.M. – I go into another studio a voice the evening show for our classic rock station in Vancouver. That show runs 7 P.M.  to midnight and it takes me about an hour to voice it.

3 P.M. – I’m back on the highway heading home. I am so very grateful I finish at a decent time. I don’t know how working parents who aren’t home until 6 do it. So much to do and so little time in the evenings!

Yoga once a week. I run outdoors; did my first half marathon 2 years ago. I run at least twice a week and usually between 5 and 7k depending on my energy level and the weather.

I have changed my ways quite a bit since having kids because I learned a lot about what’s in our food after having them. I also lost my mom to breast cancer just after my second daughter was born and that really opened my eyes to staying healthy. I was a bad eater when I was single and I will admit I still have a sweet tooth (LOVE chocolate cake). We started Meatless Mondays in our house and we usually extend that to 2 more days a week. We eat lots of fruits and veggies and we never buy boxed prepared meals. I used to live on frozen lasagnas and microwave dinners before kids now I wouldn’t even dream of it. I still indulge in sweets but only in moderation. 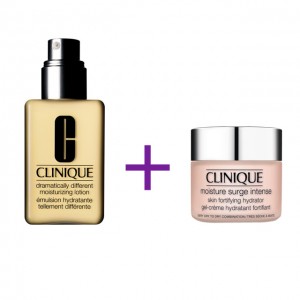 I really don’t take care of my skin like I should. I sometimes go to bed with makeup still on when I’m really really tired. (Did I just make you scream?) I exfoliate with an exfoliating sponge and St. Ive’s Scrub Renew & Firm. I also splurge once in awhile on Clinique cleansing products. I use their  Dramatically Different Moisturizer daily and in the winter, I use their Moisture Surge as well. Sometimes I wear a light self tanner so I don’t look too pale.

We have a boat so come end of May/June we are at the boat every weekend  until October. We love boating and the kids have a blast. They have a ton of friends at the marina so summer is our favourite time of year. We try to do something fun each weekend as a family. Sometimes it is a movie party with popcorn in our pjs, other times we get together with our friends who have kids and it is one big playdate. My husband and I try and do a date night every once in awhile and I have fantastic girlfriends who I get together with whenever I can.