“Look 10 or 15 years younger!” You often hear or read these types of claims when plastic surgery is the topic of discussion in the media, but according to a new study, going under the knife can make you look only three years younger. What’s more, surgical facial procedures don’t make you any more attractive either, finds the first study to investigate how we perceive the success of plastic surgery.

The four-year study, published in the journal JAMA Facial Plastic Surgery, took place at private practice in Toronto Canada between 2006 and 2010. Researchers asked fifty independent raters to judge the pre and post-operative faces of 49 patients, including 12 men, who underwent face-lifts, brow-lifts, and neck-lifts.

The raters were each randomly assigned to a rating group, and were shown 200 photographs of the patients, both before and after surgery. Raters recorded the ages they thought each patient was in each photograph, and assigned the patients an attractiveness score from 1 to 10.

After surgery, patients shaved a perceived 3.1 years off of their real age, but attractiveness was a bit harder to quantify. Overall, 75 percent of the patients were rated between 4 and 7. These numbers didn’t change significantly between pre and post-operative photos. Contrary to expectations, no one went from a 4 to a 10 after a face-lift.

One of the points that our go-to cosmetic dermatologist Dr. Lisa Kellett emphasizes to her patients before a procedure is that you’re not going to look X number of years younger. When you visit her cosmetic dermatology clinic in Yorkville, chances are you’ll hear things like you’ll look more “refreshed” or “less tired” before you hear “more attractive.” 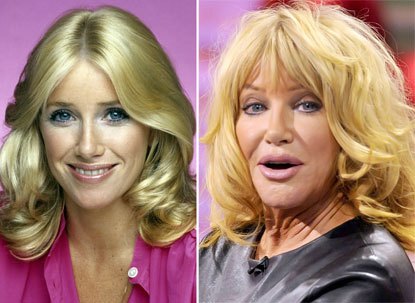 Suzanne Somers looks very different than she did in the 1970s. It’s been speculated that she’s had both surgical procedures done (a facelift, nose job) and non-invasive treatments such as fillers on her cheeks and lips.