When Kat Von D accepted deejay Deadmau5’s proposal earlier this month,the heavily-inked reality star did what most women who have tattoos of ex-lovers would: remove it!

In Kat’s case, it was of the childhood face of her ex lover, Jesse James (the scuzzy ex of Sandra Bullock). 30-year-old Kat surprised Jesse in the summer of 2011 with a tattoo on her ribcage of his fifth grade school photo on an episode of her now cancelled show, LA Ink. 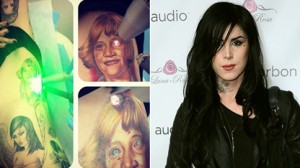 “I get to start the day off with some good ol’ tattoo laser removal! #ouchville #sillytattoos

We commend Kat for getting the ink removed, as well as, accepting the hand of our much-loved homegrown turn table star!

If you’re interested in zapping off some unwanted ink, we suggest seeing an experienced laser technician like our go-to derm Dr. Lisa Kellett. According to her team at DLK on Avenue in downtown Toronto, laser tattoo removal is a very popular service in the past five years – might be due to how mainstream tats have become in the 2000s.

The sensation is similar to bee stings or rubber band snaps. Expect a bit more discomfort if your tattoo is located in a high sensitivity area like along your spine, in the small of your back, on your hands, feet, ankles, or inner arms. Tattoos on hands or feet can require more sessions because their reduced blood flow means there are fewer white blood cells (part of your lymphatic system) working to help remove the bits of laser-smashed pigment. Several sessions spaced about a month apart are required to achieve full results.

See someone reputable for the procedure – that way, you’ll never regret a thing twenty years from now. Tattoo removal is one of the most popular services performed at  DLK on Avenue. Cost starts at $200.