Last week, I had the chance to *virtually* chat with Akil Thomas, an LA Kings Prospect and old friend. We talked about self-care, the importance of rest time, diversifying your personal brand, re-building confidence from a setback, and of course, skincare for athletes.

Check out our convo highlights below:

C: You obviously invest a lot of time in your body because that’s what you do; you’re an athlete. Are there any exercises or rituals that you’re pretty religious about, that you have to do to train your body?
A: Haha, oh yea. This may be an hour-long answer, but I have a bunch of things that I do. Our lifestyle is pretty crazy. We go to the rink and put our bodies through a lot with training, then we come home, and the rest of our day is dedicated to recovery so that we can feel OK to do it all again tomorrow.

For me right now, I’m in a unique situation because I had double-shoulder surgery this summer. So, every day, I’m going to rehab for my shoulder. I also work out and skate pretty much every single day. So, for me, it’s actually very important that I recover and invest in my body. I have compression boots for my legs, I use hot and cold baths at the rink, I have a bunch of little trinkets that roll muscles out or allow me to stretch something more efficiently, I have this compression ice machine that ices any part of my body with compression, so yea, I have invested a lot into my body. In terms of recovering from surgery, I take a couple supplements that are good for joint repair. I’m always interested in learning how to recover because it’s very much an everyday thing, whether it’s the on-season or off-season. 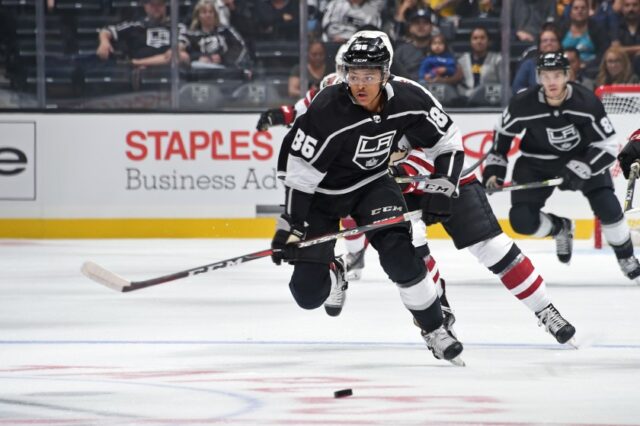 C: Do you have a certain self-care routine? What do you do during your off-time and to recharge?
A: I do a lot of different things honestly! I bought a guitar last year and unfortunately couldn’t play much during the summer because of my surgery and the rotation of my arms. But just two days ago, I realized I can play again! So, I’ve been playing bunch the last few days because I really missed it. I also try to read every day because it helps me sleep. I do stretches every night at the same time too. On the weekends, my roommates and I will bike on the beach if the boys are playing volleyball. Helps to get the legs moving.

C: Do you have a skincare routine?
A: Honestly, no. Now that I live on my own, I’ve started to gain interest in a couple different things, like skincare. I even use a diffuser! My mom has been trying to get me into some stuff. Growing up, my mom would lotion my hands and my face a lot. As a hockey player, if you sweat and have lotion on your hands, it makes your hands feel slippery. I used to hate this feeling so since then, I never put lotion on my hands. So, to answer your question, I don’t currently have a skincare routine but it’s something I would definitely be interested in now since I’m an adult.

C: And what about on your team? What percentage of guys use products and stuff?
A: A small percentage. Mostly because we’re not taught to, like it’s not in our face. No one tells us “Yo you should use skincare,” and also because personally, I never really cared about putting products into my hair, for example. I go to the rink every day and my hair is in a helmet the entire time. Then I shower right after practise, so it gets messy and putting products in seems like a waste of time for me. I also think a lot of players associate any type of body care with that because the only thing we’re focused on is going to the rink. Obviously, hockey doesn’t last forever so I won’t have this mindset forever.

C: You scored the game-winning goal for Team Canada against Russia in the World Juniors. I would love to know what was going on in your head during that moment, did you black out? Was it all a blur?
A: I don’t even know. When I watch the video of the goal, I get the feeling that I’m watching someone else. I don’t remember much, like I don’t even remember doing it. It was completely off instincts; I really didn’t know I was going to score. It just happened. It was crazy though. The only thing I remember is wanting the time to run out really badly. I was totally freaking out, thinking “these guys really can’t score right now.” 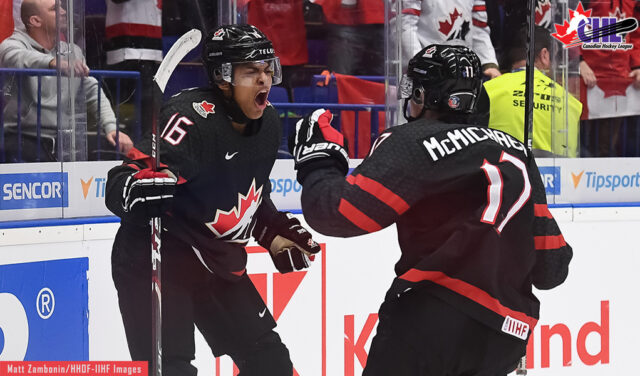 C: I’m familiar with your clothing business called Zale. Tell me a bit about it. How long have you been working on that and what do you think is the importance of spreading yourself out, so being an athlete and having a business profile as well?
A: We started Zale when I was 15, so in 2015. I’m excited because we’re really starting to get it going now, just based on the way things have gone over the last couple years. We have received quite a lot of awareness and press about it. Now, I’m feeling confident in the team and the resources that we have. I’m excited to continue to keep building the brand. We’ve finally reached the point where we have a good number of supporters, and we can finally reach the next level.

In terms of the importance of spreading yourself out and getting yourself out there, our new slogan is See Beyond, which means to see beyond what you are and what you do. Obviously, I want to be a professional hockey player and that’s my main goal, but I wanted to see beyond that and consider what I’m doing after hockey. So, starting something business-related in parallel to my hockey career is what I wanted to do. The brand is all about pushing boundaries and looking beyond society’s expectations.

C: You were featured in a CBC article which says, Akil Thomas notches natural hat-trick to lead hockey’s first all-Black line since the 40s. Can you talk a bit about this special experience?
A: I woke up from a pre-game nap and our team sent out the lineup for the game. I noticed that our line was three Black guys. I remember thinking that I’ve never seen that before. I have a podcast, and so I texted the guys saying “Me, Q and Devo are playing on the same line tonight, you guys should make a post about this.” They did a bit of research and put something up, and after the game a bunch of other hockey accounts had re-posted it. One text caused the news to break, which is crazy. The team also didn’t know, they didn’t realize that they had put us all on the same line, it wasn’t intentional. It just worked out that way which was special. We also all got points that game which was nice. I had a really great game personally too. 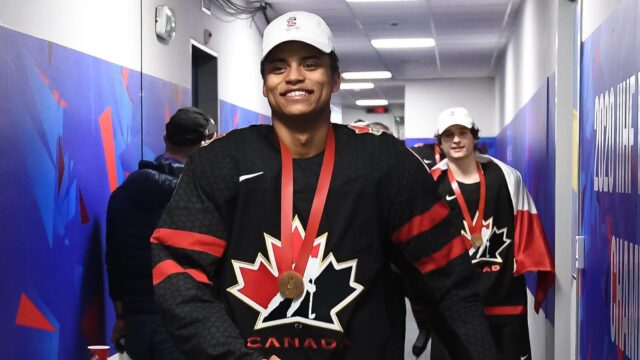 The media played a pretty big role in getting that news out. It was important to me that this was covered. It was posted on accounts such as Spittin’ Chiclets, which represents a hockey-loving group of supporters, you know, like a community. The supporters listen to episodes, are familiar with the guests, interact with the content, and feel like they are part of a community. This is what I wanted for Black hockey players—to have a platform where they can see players exactly like them. With the platform, they then have the ability to support, learn about, and follow the players’ personal journeys.

C: I assume your schedule is sooo hectic. Do you have set, allocated rest times within your hockey schedule?
A: During the year we get four days off a month. Yea, so it’s pretty hard on the body. However, you honestly get used to it after about a month. Your body starts to adjust. In fact, the days where you don’t go to the rink to practise you feel weird. There isn’t a lot of downtime, so it’s all about how you manage your time off. When you get home you have to drink a lot of water, eat correctly, and take care of your body.

C: Was there ever a time where you weren’t as confident in your abilities, whether that be as an athlete or off the ice?
A: I was drafted in the second round, which is really high, like people would want to be drafted in the second round. But at the same time, I was personally expecting to go first. If someone had told me before the draft “you’re going second round”, I would think that was sick. But just because I wasn’t prepared for it and because I was predicted to go first round, it was tough for me. I wasn’t mentally prepared for it; it wasn’t even a thought in my mind until it happened. I know second round is still high, but I started to get into a negative mindset where I thought, Woah, do I suck? What was wrong? Am I actually not that good? So that was tough for me, my confidence was at an all-time low after that. However, looking back, it was probably the best thing that had ever happened to me because of the changes I made from it. I knew that I was drafted second round for a reason, so I needed to clean up a few things. I have a lot of people to prove wrong, which is really motivating for me. 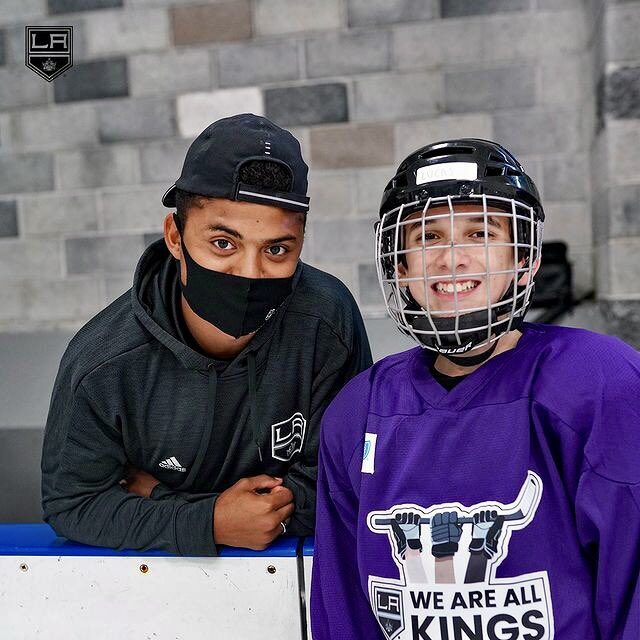 C: Did you ever have a special coach or trainer who really inspired you?
A: I would say my Dad. My Dad played professional hockey, so from a young age I didn’t only look up to him as a Dad but also as a hockey player. He was always captain, and always one of the better players on the ice. I always thought of my Dad as a superhero. I wanted to do everything he did and I wanted him to be impressed with how I played.

C: What’s next for you? What are you excited for in the future? What do you see on the horizon for yourself?
A: I just want to make the NHL at this point. LA has a lot of young players that are really good so it’s probably the hardest team in the NHL to make. That’s obviously been a challenge for me. I had a great year last year so I’m looking to build on that. The surgeries may seem like they set me back but that’s something I won’t let happen. I’m excited to get back to playing and hopefully earn a spot and go from there.