It’s no wonder why some ethnic women feel immense pressure to go under the knife. For example, Iranian women love nose jobs (read this for proof) and asians hate their eyes. American-Chinese television host, Julie Chen, made headlines recently when she made a shocking confession on The Talk. 43-year-old Chen revealed that at 25, she  underwent double eye-lid surgery to make her eyes appear bigger at the request of her boss who told her that she would never never sit at the anchor desk due to her heritage. Chen added that an agent who represented high-profile celebrities would not take her on unless she got the operation; he gave Chen a list of plastic surgeons. Chen went ahead with the surgery, and said that her eyes took a full year to heal and settle in their new shape. Though conflicted with her decision at first, Chen said in the end it was worth it because her career took off afterwards (watch her candid confession here). 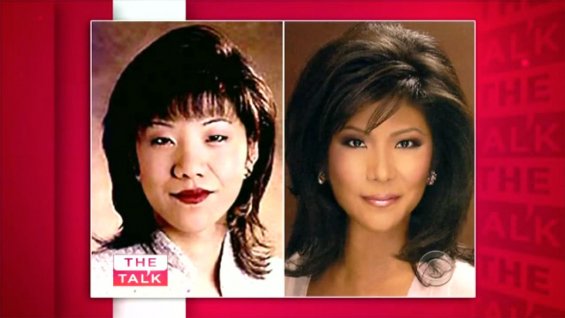 Personally I have nothing against plastic surgery, however, going under the knife should not be taken lightly because downtime is lengthy and the results can be devastatingly drastic, good or bad. That’s why I’m such a fan of non-invasive dermatological procedures; They don’t completely change your features, but rather enhance them subtly. For instance, I learned from my recent conversation with Diana Phillips, the injector at our go-to dermatology clinic DLK on Avenue, that Asians can achieve larger more almond-shaped eyes with Botox cosmetic. Many derms and cosmetic nurses are injecting minuscule amounts of Botox into the center of the lower lash line’s orbicularis oculi muscle to create a widening of the eye. Another neat thing a little Bobo can do is fix a masculine-looking square jaw, which is a popular treatment for Korean and Chinese women, who genetically have larger jaw muscles (read about it here.) And then there are the myriad of lasers and cosmetic peel programs that can help clear away the tell-tale signs of aging that are unique to each race. These include sunspots, red spots (cherry angiomas are common in mature white skin), pregnancy mask (melasma is common in Indian women), acne scarring, irregular texture, and fine lines.

My point is, these days cosmetic dermatologists can work wonders on your face, so before you even think about surgery, consider the no-knife, slow-and-steady approach to enhancing your natural beauty. And might I suggest gaining some “pretty perspective” by looking at this computer-algorithm of “the average women faces in different countries”. These images involved the random positioning of eyes, nose, mouth, bone structure, and skin tone to generate an average (mean) image for each culture. So whenever you feel compelled to change your facial features, keep your ethnicity in mind and those beauty expectations in check.