Botox for a square jaw

Growing up, Tina Phuong was always self-conscious about the angular shape of her face but it wasn’t until much later that she realized that botox could be used to treat a square jaw.

“My two sisters have slim oval faces with high cheekbones but I’ve always had a square jaw–a feature my mom called the “moon face” which is common in Chinese and Korean women.” Born in Vietnam, the 33-year-old veterinarian says that with age, she became more comfortable with the masculine shape of her face, but a routine visit to her dentist made her insecurity resurface–and revealed why her face was not the way nature intended it to be.

“My dentist commented about the clicking sound in my jaw when I open my mouth and then asked me if I ground my teeth at night while sleeping.” Phuong was told that teeth-grinding (a.k.a. bruxism) can increase the size of the jaw muscle (a.k.a. the masseter muscle); Much like how a bicep gets bigger with regular workouts, the masseter muscle can increase with regular grinding, clinching and chewing. “I chewed gum all the time too. I didn’t realize all of this had aesthetic consequences. I told my dentist that my jaw generally feels tight in the morning and I often get tension headaches regularly,” says Phuong. Her dentist told her that she had Temporal Masserter Joint Disorder () and recommended the usual protocol: a mouth guard. Phuong used it for a few months, “but it didn’t help with my moon face!”

Botox on the menu

It wasn’t until one afternoon over lunch with a girlfriend that Phuong found out about Botox injections for a reducing the look of a square jaw. “My friend, who is Korean, told me that this procedure was very popular in her community among women of all ages. I was shocked! I’ve never heard about it. I thought Botox was just for wrinkles.”

Botox, a purified form of the toxin produced by the food-poising bacterium Clostridium botulinum, is the most widely used wrinkle-smoother. But it is also used off-label by skilled injectors to minimize the look of a square, masculine jaw. By injecting Botox into the junction between a nerve and muscle, it stops the communication emitted from the nerve to the working muscle, thereby relaxing the muscle. In the case of overworked masseter muscles, this relaxing effect can create a dramatic contouring effect that can seen in as little as a month.

Phuong spent the rest of the weekend Googling before and after photos of “Botox for square jaw” and looking up journal articles to support Botox for TMJ. “I found that there was a lack of clinical studies for the treatment of TMJ but very promising studies in cosmetic dermatology journals from abroad. The adverse effects (death and paralysis) were very minimal. After two solid days of research and consulting my friends in the medical field, I felt comfortable going forward with the treatment, but I didn’t know whether to go to a dentist, a plastic surgeon, an orthodontist, or a dermatologist. But I was certain I wanted to go to a medically supervised facility. No back alley Botox or shoddy-looking medi-spa! I also looked around for prices and saw that there was a big fluctuation from place to place. And no place really advertised Botox for TMJ treatment versus facial contouring.”

While relieving her jaw tension was her primary concern, the vanity benefit of softening her enlarged lower jaw muscle was very appealing. “I thought Botox would really be hitting two birds with one stone!”

Phuong decided to make an appointment with the medical nurse, Diana Phillips, at DLK on Avenue, at the recommendation of her friend who she had lunch with. Being in the medical field herself, Phuong says she bombarded Phillips with questions.

“Right away I felt comfortable with the nurse because she knew her stuff. She said that the asian masseter muscle is genetically bigger, and that she has tons of asian patients who get it done, which made me feel good. She thoroughly explained the pros and cons and showed me pictures of real patients. I felt even more at ease after she brought in the consulting dermatologist [Dr. Lisa Kellett] to make sure if I was a good candidate.”

Tina was given 40 units per side. “It felt like a tiny pinch. I clinched my masserter muscle and the nurse did three injections per side. An hour later, it felt less tense. I was impressed!” The cost of the treatment was $800.

“The botox treatment gave me the results I was hoping for: relief in my jaw joints and softening of my overall jaw line. Unless I have any other major financial obligations, I will likely be repeating the treatment when needed. Also, I am considering additional treatment to my temporal muscles since I still suffer from minor tension in the upper area of my jaw. Although this is not a long term answer, I highly recommend this to both men and woman who are looking for some relief from bruxism. The additional cosmetic benefit is just the added bonus!” 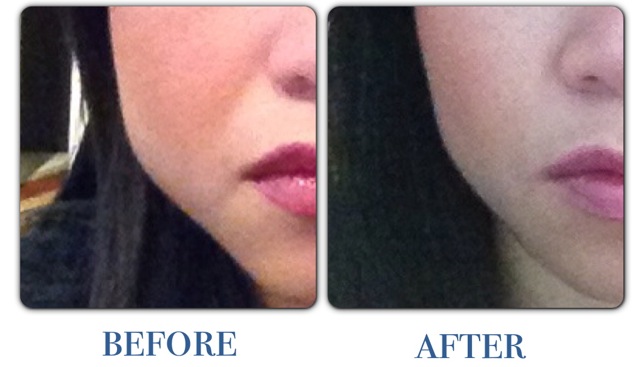