Coined a “grandma” disease, lipodystrophy has a bit of a Benjamin Button effect on sufferers: they appear aged and wrinkled, beginning in early childhood, due to a loss of fatty tissue and decaying bones caused by metabolic irregularities.  Broken down, the term translates to “abnormal fat growth”. While there are several types of lipodystrophies, each with a unique set of challenges and characteristics, a feature of some are missing buccal fat pads – the same ones that typically give the appearance of chubby cheeks in healthy people. With hollow cheeks, a prominent chin and sunken features, teens can appear middle-aged and may look older than their parents.

Sixteen-year-old Zara Hartshorn, for example, recently found herself under media spotlight in the U.K. when she underwent a facelift after classmates teased her for looking like a 60-year-old. In some individuals, like Zara, the disease is genetic, while, for others, it is a symptom of another health condition, like autoimmune diseases and HIV. The condition usually lasts a lifetime and is not curable. 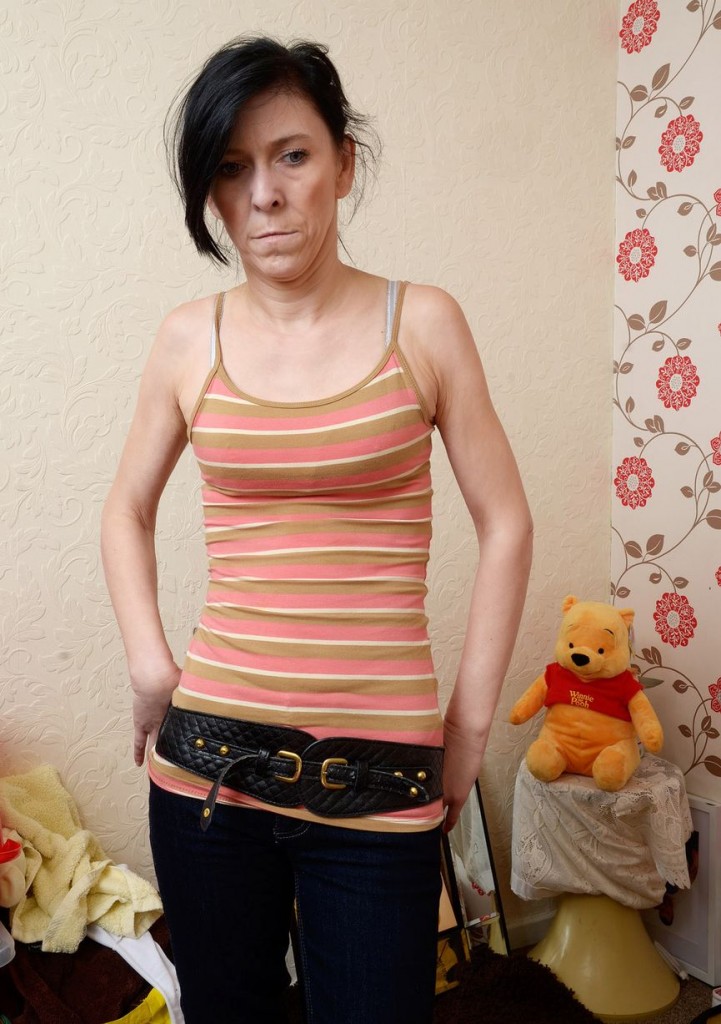 Interesting fact: The location and degree of fatty tissue loss differs based on the type of lipodystrophy. In many instances,  just as fat tends to disappear from desirable areas, it shows up in unwanted spots, like around the organs. Diabetes is common.

Most commonly caused by ingrown hairs that pierce the skin, pilonidal (literally meaning “nest of hair”) sinuses form at the bottom of the tailbone, just above where the two butt cheeks separate. Cysts, pus-filled abscesses or, more cutely called “dimples”, can form if the sinus becomes infected, leading to, quite literally, a pain in the butt for sufferers. Although they aren’t dangerous, the lesions can be excruciating, and require removal through draining or surgery. Unfortunately, they often return.

Pilonidal sinuses occur predominantly in young men – though they are also found in women – and can be described as a symptom of too much sitting  because spending time planted on your behind tends to push hair into the skin. For this reason, doctors often cite obesity and inactive lifestyles as risk factors for pilonidal sinuses. Overall, the condition is rare in the general population, with incidence rates of 26 per 100,000 people.

Interesting fact: Pilonidal sinuses have also been found on body parts other than the buttocks. For example, in the early 1990s, the Journal of Hand Surgery referred to it as an “occupational disease” for male barbers, stating that customer’s hairs can penetrate the thin skin found between fingers.

Along with wrinkles and droop, pemphigus takes a spot among skin conditions that begin to manifest in middle age. Unlike cosmetic changes, however, pemphigus is a rare and serious autoimmune disorder, identifiable by blisters on the skin (scalp, face) and mucous membranes, such as those in the mouth or on the genitals. The wounds often look like serious burns, and can easily break, resulting in open sores and infection.

But why does it happen? Pemphigus occurs when auto-antibodies are produced in the body, and attack and break down proteins in the skin called desmogleins, which typically hold the skin cells intact like a bottle of Elmer’s glue. When skin cells begin to peel and separate, fluid gets stuck between the layers, causing the blisters. If left untreated and infection occurs, the condition can be fatal; however, treatments containing corticosteroids (steroids) and other drugs are helpful in keeping it under control.

Interesting fact: One of the tell-tale signs of pemphigus is peeling of the skin near the blistered area. Doctors rub the skin to check for flaking when diagnosing the condition. 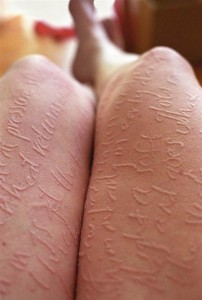 Individuals with dermographism have the unique ability to write, or carve, words into their sensitive skin…sort of.  Pressing on the skin firmly creates a red line that quickly begins to resemble hives – it flares up and raises, forming an itchy, red wheal that makes the body part in question look like a human Etch A Sketch.

When the skin is touched or stroked with an object, it undergoes an allergic reaction that releases histamine, which causes small blood vessels to leak and fluid to build up underneath the skin in a lined pattern that resembles writing.  A simple shirt collar done up too tightly can end up looking like pen strokes. While the root cause is still peculiar to doctors, it’s possible that certain drugs, insect bites or a type of stomach bacteria called Helicobacter pylori, can contribute to dermographism. Daily antihistamines are usually the first line of defense but,  for the most part, nailing down the source of the outbreaks is a hit or miss endeavor. Approximately five percent of the population is affected by dermographism; young adults in their 20s and 30s are most commonly affected.

Interesting fact: In 2012, Ariana Page Russell, an artist in New York City made news when she attempted to increase awareness for dermographism by using a stencil to “draw” floral patterns onto her body. For more skin-crawling photos, check out her blog dermatographism.wordpress.com.

Within minutes of stepping out into the sun, some individuals experience a sudden, dramatic onset of symptoms including hives (another word for “urticaria”), itching, redness and swelling. In a reaction that mimics a true allergy  – think peanuts or shellfish – the immune systems of sufferers “freak out” once exposed to ultraviolet (UV) radiation, causing the bumpy, uncomfortable physiological response known as solar urticaria: a true allergy to sunlight.

Getting an itchy rash when you are out in the sun doesn’t mean you have solar urticaria – you could have a sun sensitivity, which is more common. Solar urticaria is rare, accounting for roughly five percent of patients with photosensitive disorders across the world, and is only marginally more common in women than it is in men. Though symptoms typically clear up within one hour of ditching the sun or tanning bed, which also emits UV rays, it is often chronic, meaning that unless sufferers are willing to permanently stay indoors behind blackout shades (an effective but highly impractical form of treatment), it returns.

Solar urticaria is still a relatively gray area medically, but researchers have found that there is some good news for those who get diagnosed. For one, it doesn’t affect general health. Also, it may be possible to manage symptoms by taking preventive measures, like slathering on a broad-spectrum sunscreen and wearing sun-protective clothing before heading outdoors. Medications, like anti-histamines, have a 70 percent success rate, and more advanced treatments, like photohardening, have recently shown a potential to build up tolerance to the sun with increasing amounts of exposure to light.

Interesting fact: Chronically-exposed skin, like on the face and hands, is less likely to be affected by solar urticaria, than skin that is usually kept covered up. 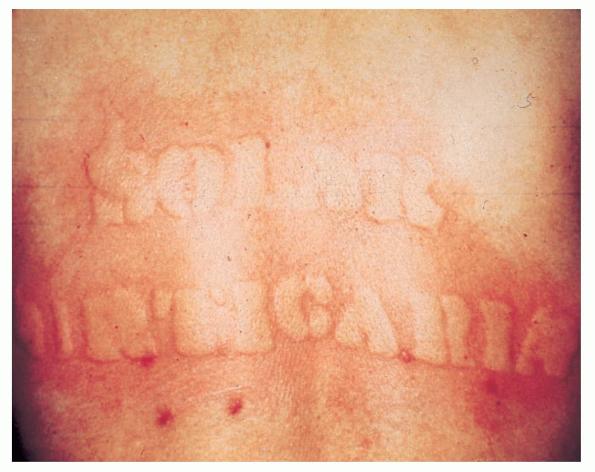 This man might have Solar Urticaria and Dermographia: skin so sensitive you can write on it!

About the Author Kasia Wind is a freelance health writer living in Petawawa, Ontario. She enjoyed digging up the dirt on these rare skin disorders – partially because she’s nosy, and partially because she’s just been diagnosed with her own wacky skin condition, Grover’s Disease, which predominantly affects males over 40 and has no relation to the muppet.